Create an Account - Increase your productivity, customize your experience, and engage in information you care about.

Garland’s Downtown Commercial District incorporates elements of three agricultural business districts: Duck Creek, Embree and New Duck Creek. Earliest was old Duck Creek near the present crossing of Avenue B and the creek.  Unfortunately, both railroads circumvented it by three-fourths of a mile to the north and one mile to the east in 1886.

At the crossing of the two lines, the Santa Fe Railroad purchased development land and after building a depot, the Santa Fe subdivided the land into lots and blocks and named the town Embree.

From the adjoining acreage near the MK&T depot, other investors platted the third incorporated district of “new” Duck Creek.

On the morning of Jan. 7, 1887, a fire reduced old Duck Creek’s commercial district to ashes.  Businessmen immediately planned to resume operations as they moved east across the creek to the new townships.  Without a central square or open space to delineate between Embree and the new Duck Creek, Harbison Street, now State Street, became the border line. Embree and New Duck Creek rubbed together like two flint stones and sparks flew. Each claimed its own residents, businesses, and newspaper, but Embree had the only post office, served by the Santa Fe.

After a compromise, the Embree post office was relocated to a neutral midpoint between the depots and renamed Garland.  The peace and prosperity that followed was shattered on November 30, 1899, Thanksgiving Day, when a fire broke out.  The fire burned across the town, emptying two wells and all volunteer bucket brigades before burning itself out.

With the center of Garland now a blank slate from the fire, the lots were acquired to create a public town square.  Soon, an improved business district arose, constructed of brick surrounding the new public open space, which remains today.

Garland’s historic downtown commercial district was listed in the National Register of Historic Places in 2017 in recognition of its importance in the history of Garland and the State of Texas. The National Register listing also recognizes the architectural significance of the buildings within the district, as they represent many architectural styles and forms present in Garland’s early development.

To sign up for the monthly Heritage Crossing Newsletter, click HERE.  Below is a sample of our latest edition. 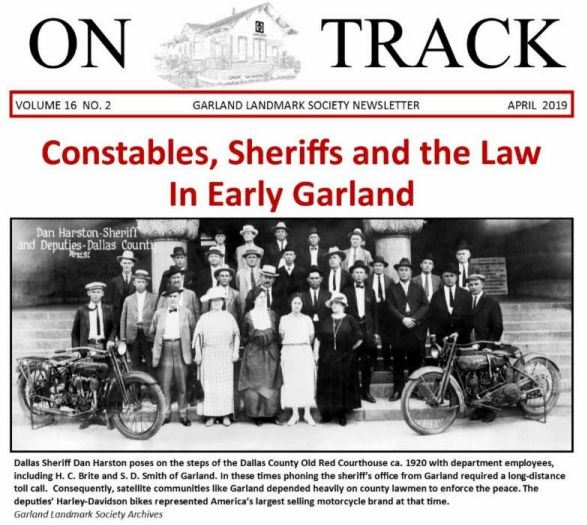 By appointment only, Monday through Friday.